Dear Brothers and Sisters throughout the world,

Men and women of good will!

Christ is risen! Peace to you! Today we celebrate the great mystery, the foundation of Christian faith and hope: Jesus of Nazareth, the Crucified One, has risen from the dead on the third day according to the Scriptures. We listen today with renewed emotion to the announcement proclaimed by the angels on the dawn of the first day after the Sabbath, to Mary of Magdala and to the women at the sepulcher: "Why do you search among the dead for one who is alive? He is not here, he is risen!" (Luke 24:5-6)

It is not difficult to imagine the feelings of these women at that moment: feelings of sadness and dismay at the death of their Lord, feelings of disbelief and amazement before a fact too astonishing to be true. But the tomb was open and empty: the body was no longer there. Peter and John, having been informed of this by the women, ran to the sepulcher and found that they were right. The faith of the Apostles in Jesus, the expected Messiah, had been submitted to a severe trial by the scandal of the cross. At his arrest, his condemnation and death, they were dispersed. Now they are together again, perplexed and bewildered. But the Risen One himself comes in response to their thirst for greater certainty. This encounter was not a dream or an illusion or a subjective imagination; it was a real experience, even if unexpected, and all the more striking for that reason. "Jesus came and stood among them and said to them, peace be with you!" (John 20:19)

At these words their faith, which was almost spent within them, was rekindled. The Apostles told Thomas who had been absent from that first extraordinary encounter: Yes, the Lord has fulfilled all that he foretold; he is truly risen and we have seen and touched him! Thomas however remained doubtful and perplexed. When Jesus came for a second time, eight days later in the Upper Room, he said to him: "Put your finger here and see my hands; and put out your hand and place it in my side; do not be faithless, but believing!" The Apostles response is a moving profession of faith: "My Lord and my God!" (John 20:27-28)

"My Lord and my God!" We too renew that profession of faith of Thomas. I have chosen these words for my Easter greetings this year, because humanity today expects from Christians a renewed witness to the resurrection of Christ; it needs to encounter him and to know him as true God and true man. If we can recognize in this Apostle the doubts and uncertainties of so many Christians today, the fears and disappointments of many of our contemporaries, with him we can also rediscover with renewed conviction, faith in Christ dead and risen for us. This faith, handed down through the centuries by the successors of the Apostles, continues on because the Risen Lord dies no more. He lives in the Church and guides it firmly toward the fulfillment of his eternal design of salvation.

We may all be tempted by the disbelief of Thomas. Suffering, evil, injustice, death, especially when it strikes the innocent such as children who are victims of war and terrorism, of sickness and hunger, does not all of this put our faith to the test? Paradoxically the disbelief of Thomas is most valuable to us in these cases because it helps to purify all false concepts of God and leads us to discover his true face: the face of a God who, in Christ, has taken upon himself the wounds of injured humanity. Thomas has received from the Lord, and has in turn transmitted to the Church, the gift of a faith put to the test by the passion and death of Jesus and confirmed by meeting him risen. His faith was almost dead but was born again thanks to his touching the wounds of Christ, those wounds that the Risen One did not hide but showed, and continues to point out to us in the trials and sufferings of every human being.

"By his wounds you have been healed" (1 Peter 2:24). This is the message Peter addressed to the early converts. Those wounds that, in the beginning were an obstacle for Thomas' faith, being a sign of Jesus apparent failure, those same wounds have become in his encounter with the Risen One, signs of a victorious love. These wounds that Christ has received for love of us help us to understand who God is and to repeat: "My Lord and my God!" Only a God who loves us to the extent of taking upon himself our wounds and our pain, especially innocent suffering, is worthy of faith.

How many wounds, how much suffering there is in the world! Natural calamities and human tragedies that cause innumerable victims and enormous material destruction are not lacking. My thoughts go to recent events in Madagascar, in the Solomon Islands, in Latin America and in other regions of the world. I am thinking of the scourge of hunger, of incurable diseases, of terrorism and kidnapping of people, of the thousand faces of violence, which some people attempt to justify in the name of religion, of contempt for life, of the violation of human rights and the exploitation of persons. I look with apprehension at the conditions prevailing in several regions of Africa. In Darfur and in the neighboring countries there is a catastrophic, and sadly to say underestimated, humanitarian situation. In Kinshasa in the Democratic Republic of the Congo the violence and looting of the past weeks raises fears for the future of the Congolese democratic process and the reconstruction of the country. In Somalia the renewed fighting has driven away the prospect of peace and worsened a regional crisis, especially with regard to the displacement of populations and the traffic of arms. Zimbabwe is in the grip of a grievous crisis and for this reason the Bishops of that country in a recent document indicated prayer and a shared commitment for the common good as the only way forward.

Likewise the population of East Timor stands in need of reconciliation and peace as it prepares to hold important elections. Elsewhere, too, peace is sorely needed: in Sri Lanka only a negotiated solution can put an end to the conflict that causes so much bloodshed; Afghanistan is marked by growing unrest and instability; in the Middle East, besides some signs of hope in the dialogue between Israel and the Palestinian authority, nothing positive comes from Iraq, torn apart by continual slaughter as the civil population flees. In Lebanon the paralysis of the country's political institutions threatens the role that the country is called to play in the Middle East and puts its future seriously in jeopardy. Finally, I cannot forget the difficulties faced daily by the Christian communities and the exodus of Christians from that blessed Land which is the cradle of our faith. I affectionately renew to these populations the expression of my spiritual closeness.

Dear brothers and sisters, through the wounds of the Risen Christ we can see the evils which afflict humanity with the eyes of hope. In fact, by his rising the Lord has not taken away suffering and evil from the world but has vanquished them at their roots by the superabundance of his grace. He has countered the arrogance of evil with the supremacy of his love. He has left us the love that does not fear death, as the way to peace and joy. "Even as I have loved you he said to his disciples before his death so you must also love one another" (cf. John 13:34).

Brothers and sisters in faith, who are listening to me from every part of the world, Christ is risen and he is alive among us. It is he who is the hope of a better future. As we say with Thomas: "My Lord and my God!" May we hear again in our hearts the beautiful yet demanding words of the Lord: "If any one serves me, he must follow me; and where I am, there shall my servant be also; if any one serves me, the Father will honor him" (John 12:26). United to him and ready to offer our lives for our brothers (cf. 1 John 3:16), let us become apostles of peace, messengers of a joy that do not fear pain, the joy of the Resurrection. May Mary, Mother of the Risen Christ, obtain for us this Easter gift. Happy Easter to you all.

The good old 'FreeCapitalist' has undergone an image makeover.
He is no longer a slightly overweight, balding goofball with an off-kilter grin, now he looks to be a darkly handsome protegé of Satan himself!
Well done, Rick, your business of assisting people in becoming money-driven idle investors and bourgeois jackasses (for a nominal fee, of course) will surely skyrocket now.
Oh, and coincidently, I'm sure you'll be able to annoy those "socialists" even more with your newly purchased and debonaire style, good man. 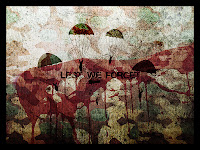 We will freedom for freedom’s sake, in and through particular circumstances. And in thus willing freedom, we discover that it depends entirely upon the freedom of others and that the freedom of others depends upon our own. Obviously, freedom as the definition of a man does not depend upon others, but as soon as there is a commitment, I am obliged to will the liberty of others at the same time as my own. I cannot make liberty my aim unless I make that of others equally my aim.