Two sides to the canyon


Wandering the lower reaches of our dual-minded canyon yesterday, tracking from the north-facing south side and the southern-exposed north side, I experienced some deep ecology.
On the south side, four inches of fresh powder covered the beaten and blasted crust remaining from the rest of the winter's snowfall. Still deep shadows on both sides of the canyon made for pockets of snow on the north slope. The thing that struck me, though, was the divergence of sound and life on either side.
With the dogs alternately stepping on my snowshoes and leaping far ahead in search of new smells, I listened to the still, quiet eternal shade of winter on the southern slopes.  A  few birds chirped and twittered in the pines and bare maples, and that was about it. Not much else stirred; there are places on that side of the canyon that don't get direct sun for two or three months of the cold season.

Ambling along, I noticed that there were black dots in the otherwise pristine, fresh snow. Beside a stretch of fishable water, that's a winter sign sought after by anglers everywhere; there had been a hatch of flying bugs at some point of the afternoon. Though it was four in the afternoon as I ambled up the trail, a few hours earlier, it had been warm enough to coax the wee bugs out of their pupae on the trunks of trees and into the air for a flurry of feeding and copulation before the air became too cold. Their bodies lay on the snow, mostly motionless, having succumbed to the call of life and eventual death, all in one short afternoon.
This starts happening more frequently here in February as the sun gains momentum and better angles, so in that this was the first time I'd seen it this year in January buoyed hope for the eventual spring. I shivered and noted that I hadn't been in the sun at all during the time I'd hiked up the south side, so I glanced up from the stilled flies and caught sight of the honey-yellow limestone scree slopes of the north side of the canyon, still bathed in sunlight at four thirty in the afternoon.
When on that side, there were more birds making much more racket; chirps, songs, caws, and calls were quite plentiful in the Juniper and Piñon. The temperature, because of the sun and lack of snow on the limestone-strewn slope, was at least eight degrees warmer and certainly above the freezing 28º on the other side.  There were a few squirrels about, and the flies dead and down on the other side still buzzed lazily in the waning sunlight. The incline was steep and footing dicey at times, but on this ‘other side’ of the canyon, it seems a privilege and miracle to be in a different environment within sight of the other.
While Zöe couldn’t care any less to be scrambling about on the loosey slopes, Old Moshe was quite annoyed and embarrassed to be stumbling behind, so we headed back after only a few minutes of wandering the ‘desert’ of the spit canyon.  I was struck by the contrasts of our little canyon’s personality during this time of year, and while one never knows what to expect from the climate from year to year, it’s good to be able to hope for just about anything.
- January 30, 2012 2 comments:

There's not much in the way of rhythm in my life or heart right now, it's the middle of the dark, cool (not consistently cold this year!) winter and snow covers the ground on and off, alternating with dead, matted grass and freeze-thaw mud. One day it's mud, the next three, snow, four or five of mud, three of frozen mud, and so on.
The creeks are flowing well, but I haven't had much time and energy for fishing or really, for driving to the streams. The kids are fun to watch run in and out the front door, not worried about the cold or dark, so I follow them around a bit and find something else to do inside or not too far from the house. 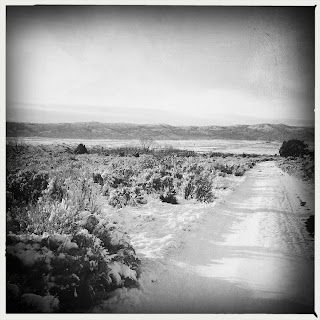 The earth is not hard frozen very deep this year, either, so I've been out digging around a bit to see what is stirring beneath the frost; worms, roots and a few odd insects having taken shelter where they could emerge when it's time in a few more months. The colors are normal for this time of winter, browns, tans, light greens and grays; with fleeting blue and white from time to time above the digging site. Sunsets have been a joy all through the fall and into this winter, from time to time. That's a good thing and looked forward to as something that joins all seasons 'round here.
Most things flow well, but there's not much in the way of predictability. That is a lesson to be internalized with gusto and eyes wide open. Nothing is often to be expected from life, and when something blessed can be looked forward to with regularity, there's one thing that ought be done.
That's the very thing that needs be done anyhow, anyway, and in any season.
Give deep thanks often; the ride won't last long.
- January 23, 2012 1 comment:

Been taking some time in collaboration with my little brother at one of his sites, http://www.hipstaproject.com/ .
Some photography and commentary with the occasional haiku hidden amongst the werds.
Check it out should you care to.
- January 21, 2012 No comments:

Spent the week preparing for the spring semester of teaching to begin at Snow; plenty of time comparing old syllabi and what I hope to make happen in my classroom this coming term. I've noticed how rapidly I ramp up the writing toward the end of the semester, to the point of making things a little difficult on freshmen realizing that they procrastinate too much in all classes. I dialed it down a little, but not too much...
I'm glad that the day's getting longer, and even though it's been quite warm and dry 'round here, it's good to have some hope for the way things are headed. Speaking of hope, I do look forward to a change of weather for at least a couple of months here, but it's always good to have a little light and progression toward equinox.
We spent some time up at the cabin this week, too, looking for things that need to be done to finish it (after sixteen years of diddling at its construction) or seal it up where the squirrels and mice have made a shambles.  The stoves need to be put where they should be, too. Lots of soffit, fascia and staining. 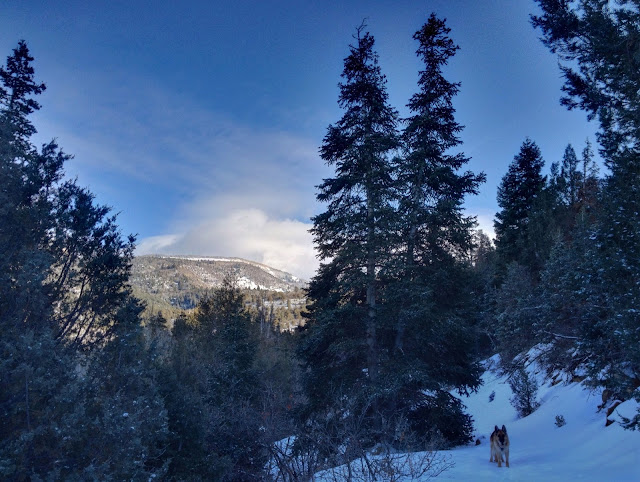 But the place is nice. You can go about anywhere for at least thirty miles 195 degrees east of the place and see no one and no sign but prints and tracks here and there, and hear not much but the snow, the wind and the odd un-migrated bird this time of year.
It does a heart good to be out with its dog and a whistle on its lips.
- January 08, 2012 1 comment: