On a day with snow coming down, I don't have much else to do but write, draw and re-imagine things in general. Each is a good thing and very much useful to me. 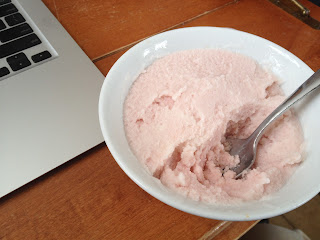 We watched 'The Nature of Existence' this morning with the kids, and though i imagine it wouldn't be acceptable to most as viewing material, we used it as our Sunday 'devotional' for the family. It discusses the nature of God, religion, gods, philosophy, science, and about anything else with respect to humanities' yearning for meaning and the divine. The narrator uses as his premise his own quest for meaning and timing in his life, and the narrative follows his path of seeking opinions and answers from those around him to experts and adherents in many paths and ways far away, on their own places of origin.
The documentary is an eye opener, and the kids all enjoyed it for their own reasons.
And my the way, Jesse made me a dish of his powder-snow ice cream, too.
A good snow day it's turning out to be.
- February 19, 2012

No snow ice cream in my part of the universe.
(One of life's little injustices.)

Not many snow days in my little part of AZ. No tasty snow ice cream, either.