Not a whole lot going on in the way of travel these days; high gas prices just remind me that I'm burning something that doesn't come back very easily. I've too many psychoses and aversions to going far too fast and too often, not that I wouldn't like to get out of town more often. See? Conflict. I'm lousy with it.
Traipsing amongst the trees and bushes of the foothills and canyons southeast of SpringTowne, I've been thinking about the people who have been here before; both those whose traces I see along the trails and whacking through the bush and those who spent more time than I'll ever be able to but who left no evidence on the physical plane.
I can't help but think that a man's actions are the record of and testament to his hopes and aspirations and that those actions and aspirations really matter in the grand scheme of things, despite how little one person might be in the face of seemingly relentless opposition or misunderstanding. 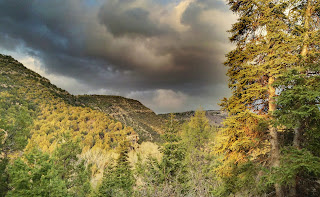 We bandy about both praise and slander in our society in such a way as to render a temperate person intemperate through only the popular accounts of both. One-time practitioners of courage in the face of high odds are branded 'heroes' almost as often as tools of industry and finance who find themselves practicing as 'teachers' in the halls of learning are praised as exceptional or noteworthy shepherds of young minds.
In the hills, there are men and women buzzing about on ATVs and in trucks whose feet have never walked unshod on the ground and glades around their own homes, and much less on the mountains that grace our valley's vista. There are stewards and rangers running down poor folk foraging food and medicine, antlers and bones on the slopes of the mountains we call ours. I've seen horses and riders in places I'd rather not, and small planes skimming ridges that call to my mind a trespass.
But what is the right thing? Where is the virtuous mean between use and misuse, and does it matter? Yeah, it probably doesn't matter much in the time and place we live; but overall, it does matter in a small, important way. Socrates said 'Know thyself' and dear old Thoreau spoke of the 'examined life' and virtues of that method isolated from distraction. Aristotle, taught by Socrates' pupil, Plato, of ethics, logic and virtue contended that


To truly be a virtuous person, one's virtuous actions must meet three conditions: (a) they are done knowingly, (b) they are chosen for their own sakes, and (c) they are chosen according to a stable disposition (not at a whim, or in any way that the acting person might easily change his choice about). And just knowing what would be virtuous is not enough. According to Aristotle's analysis, there are three kinds of things which come to be present in the soul that virtue is: a feeling (pathos), an inborn predisposition or capacity (dunamis), or a stable disposition which has been acquired (hexes). (Wikipedia)

In short, my observation and belief is this: the actions of a person ought to be examined in the light of simplicity, knowledge, the actions' own virtue in isolation, and the record of action and thought over time. When I blather about 'a person', I'm talking about myself and that which I come in contact with, both those I know well and personally, and those with whom I know only cursorily. Those I know only by happenstance or scarce frequency and those who I only know through stories or stones stacked one upon the other off the ridge from a trail...
People's character is molded from birth to death by circumstance and decision, by hope sustained as well as those lost in transit. Our communities, their economies and perhaps most importantly, surrounding wilderness and environments are created by many people and influences both nearby  and far away, so why would we miss the opportunity to understand the character of those we work with, are influenced by, and who make our lives what they are? The ideas we put into our heads are, some say, important both in life and eternally, depending on what we believe about time and how our souls survive or don't. Regardless, I believe, our lives and even the most mundane or seeming silly daily actions create ethos and some joy, superlative beauty and hour-by-hour progress of our species, or to the contrary, our collective can continue a decline of responsibility both to each other and to the land, furthering the tendency of our species to deny ourselves the joy of introspection and societal ethical progress.
- April 30, 2012