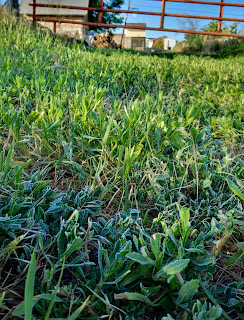 The near-ground froze in the lower slough of the acre this morning, not a deep-freeze, though one cold enough to stop fast the water in hoses and blanket the clover in hoar.
Yesterday, the wind blew warm from the southwest most of the day, until about six when the wind shifted from the north and the air came cool. It was a palpable change, and as the dust from the western deserts settled down over the hours before sunset, sweatshirts were donned and unplanted vegetable plants were brought inside after Diedre's birthday festivities.
Much was made different by the shift of temperature and winds; the change in moods was almost palpable in all of the children. Though we, like rocks, seem to common perception unchangeable by environment and weather, it's that common perception that is more often unmaleable to currents that it ought to respond to. Soft creatures are we, with doughy bellies and flaccid, fragile brains, and this earth of strong winds and unfathomable forces spins without much regard to our too often ignorant will.
- June 06, 2012