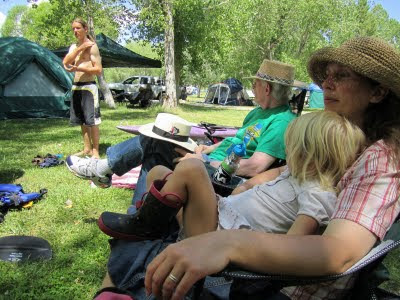 At the lake yesterday, we took the time to hang about, talk and generally just laze. We got a late start, out the door at around 11:30 with cumulus clouds billowing to the south; I didn't think the good weather would last, but it did. Showers came and went around us, but we were happily unaffected and doing our thing on the lake and its shores.
That doesn't mean that all was halcyon for Mr. Grumpy Pants. Plenty of generator-spinning, tot-sized two-stroke motobiking trailer toters all about the place. Here's just one photographic example of our mates at the lake: 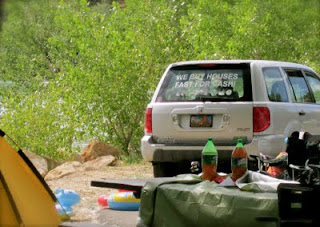 I'm formulating a post about real estate and current practices, so suffice to say that this sort of idea gives me waves of nausea. To take advantage of people, right or wrong in their own 'real estate' (read: home buying, not to be confused with damnable investment or speculation, though the three often cannot be divided to many current American minds) decisions makes me angry. Grrr.
Enough of that for now.
The kids have so much fun at the lake; they catch critters and make friends all day long. I think Jerusha and Jesse enjoy the kayaks the most, while Brynny enjoys the camaraderie of running the canoe around the water. Diedre, though much of her time is spent running to and from the restrooms with the wee girls, sits and rests as much as she can. That's a good thing for her.
What ceremony else? Though the kids didn't quite understand why Terry wasn't manning his post at LotsaMotza (he's not wasting his time down in Sanpete this summer, better employment digs up in Provo), we enjoyed consuming at our lusts three XL pizzas and much billiards-antics at the pizza house in Manti. 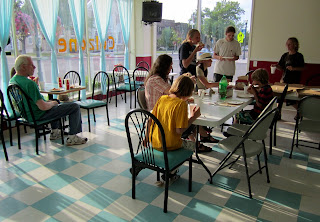 A good day out and about.