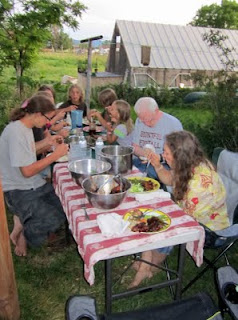 My dad's visiting right now.
He's making the kids happy and falling asleep on the couch, listening to incessant chatter and enduring tours, show-and-tells, and quickly executed plans and trips to the lake.
Yesterday evening, he sat and visited at home while I attended a county-encouraged public meeting on the topic of a 'buffer' zone to be enforced around Spring City using development and business interest-formulated county zoning laws, very few of which are suited to the desires of most of Spring City's (or, I might daresay, most of Sanpete County's) inhabitants. It's a losing battle using nomenclature and ordinance ill suited for people fed-up with incompetent and self-centered government actions.
At any rate, the county doesn't want to be bothered with paying for development near the cities, but they're cloaking their desires with the expressed purpose of 'opening up dialogue and enabling the desires of the town's residents by asking them what they'd like for individual buffer zones around each of the county's towns'. Really, the county's 'master plan' was drawn up by business and development interests with the aid of some planning and infrastructure experts, and therefore, this is part of that master plan.
Another expressed interest of the county was to prevent 'sprawl' and patchy, disorganized development away from the cities. Again, the tools presented by the county include five, one and other fractional acre lots and uses limited to business, light industrial, residential-agricultural, residential and some vague 'sensitive area' designation that might prove useful. The interests of Spring City aren't much served by these designations, especially since leaving things at five acres precludes them from inclusion in any 'buffer'. Sprawl will not be discouraged by this, rather, it will be encouraged and services will be pressured upon the cities rather than county as speculators build on the outside of 'buffer zones' where land prices will inevitably be lower than those closer into the towns.
Yeah, enough of that. So my dad sat and enjoyed the kids and company while I attended the stupid gab session, let my opinions on sensitive lands and idealistic, though ultimately workable, methods for reducing or eliminating sprawl. All we need to do is take power back from monied interests who would rather attend meetings and ensure revenue streams than spend time under a tree with their families.
What a tradeoff, no? I hope we can balance this human species out one of these days, but it won't happen very soon, it would appear.
- July 29, 2011

This is what I'm looking for. You are back.

Thanks for your work as a citizen. I count on people like you, with a passion for local issues, as my dog rested that night for another fight in another arena (disclaimer: not a real dog, a metaphorical dog; my real dog was eaten that night, w/homemade bbq sauce.)